Nations Within A Nation

Check out this week’s Get Educated, One Topic At A Time! This week learn about the history of the Bosnian War. Check out our past blog posts from this blog series, including: “A Historical Moment For Genocide”, “Two Sides To Invest”, “An Undefined Grasp Of Failure”, “A Necessary Priority”, “A Reform For The World”, “The Rural Challenge”, “Help Starts Young” and “A Voice For Women”.

Yugoslavia, once an economically thriving socialist state under the leadership of Josip Broz Tito, faced a steady decline from the early 1980s until it finally split into several different nations in the early 1990s.

Three of these nations, Croatia, Serbia, and Bosnia and Herzegovina, quickly found themselves embroiled in a bloody and brutal ethnic conflict.  Bosnia and Herzegovina is an ethnically and religiously diverse place which consisted, at the time, of about 44% Bosniak Muslims, 31% Eastern Orthodox Serbs, and 17% Roman Catholic Croats.  When Bosnia and Herzegovina tried to declare its official independence from Yugoslavia and establish itself as a single nation, the Presidents of Croatia and Serbia, Franjo Tuđman and Slobodan Milošević, respectively, were outraged, wishing to divide the land up between themselves based on dubious at best ethnic majority lines.

The Serbs and Croats of Bosnia and Herzegovina declared their own independences, creating three ethnic states within the same borders:  The Republic of Bosnia and Herzegovina, The Croatian Republic of Herzeg-Bosnia, and Republika Srpska.  Tuđman and Milošević funneled weapons, troops, and money into the pockets of their newly established ethnic allies, giving them a substantial advantage over the militarily weak Bosniaks.  The Croat and Serb militants made it their business to cleanse Bosnia and Herzegovina of the Bosniaks, often wiping out entire cities full of civilians and detaining thousands more in prison camps.  The atrocities committed against women were particularly brutal, as they were forced to watch their husbands and sons be murdered, then they were sent to what the Serb soldiers themselves called “rape-camps”.

The United Nations Security Council worked tirelessly to put an end to this humanitarian disaster, but despite the constantly increasing efforts of NATO and the United Nations Protection Force (UNPROFOR) to maintain the no-fly zone and defend the UN Protected Areas were civilian refugees could stay, the war only escalated until 1995.  The results were tens of thousands dead and displaced, entire cities burned to the ground, and a formerly united country torn into pieces.  It was not until the Washington-brokered Dayton agreement of 1995 that fighting in Bosnia and Herzegovina finally came to an end.

The simulation that our delegates will be participating in puts them right in the middle of this conflict, representing the 1993 UN Security Council.  As the fighting and ethnic cleansing approaches its peak, our delegates will have to join together in an attempt to end this war as it happens, with new events and crises being introduced as they go.  Will they manage to pacify the fighters before the Bosniaks are wiped out, or will the war grow to an even more disastrous level?  Their actions will determine the outcome of the war and shape the future of the region.

While the war itself ended in 1995, those that orchestrated the ethnic cleansing of the Bosniaks are still on trial today in the International Court of Justice, and you can continue to follow their stories.

Creating A Road To Democracy

Happy 4th  of July to all! As we celebrate the independence of our country on this day and the freedoms we are thankful for, we would like to take a closer look at the road towards independence for other countries around the world.  News headlines the past few months have been dominated by the strive for democracy in the Middle East and North Africa.  Here’s our second blog post from our newest blog series–Get Educated, One Topic At A Time featured every Monday, whose focus today is on this year’s “Arab Spring” from start to present!  And speaking of emerging democracies, stay tuned for a blog post later on this week in honor of Southern Sudan’s official independence on July 9th!

While the term, “Arab Spring” is one of some contention, there can be no denying that there is a major change happening in the Middle East and North Africa.  Said by some to be as important, if not moreso to world history than the fall of the Berlin Wall, the “Arab Spring” has significantly changed the political atmosphere both within the region and around the world.  Beginning when Mohamed Bouazizi, a Tunisian college graduate who was selling vegetables from a cart because of the high rates of unemployment there, set himself on fire on the steps of parliament after corrupt police confiscated his wares, the resulting protests soon spread from Morocco to Iran.  On January 14, 2011, President Zine el-Abedine Ben Ali fled Tunisia, becoming the first dictator to be ousted as a result of the “Arab Spring.” 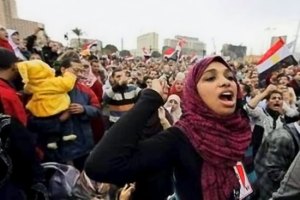 Protests soon spread to Egypt, where President Hosni Mubarak was the next to step down after three decades in power.  The demonstrations were centered in Tahrir (Liberation) Square in Cairo, Egypt’s capital city.  Thousands of people stayed in the square for eighteen days amid attempts by the government to placate the crowd with small concessions and violent attacks by forces loyal to Mubarak.  The Egyptian people persevered, however, and are now, hopefully, on their way to free and fair democracy.

Today, movements have sprung up in almost every country in the Middle East and North Africa, from small scale peaceful demonstrations for social and political reforms like in Kuwait and the United Arab Emirates to outright bloody conflict and civil war like in Syria and Libya.

The United Nations has not become directly involved in any country yet, though it has issued several statements expressing deep concern over the human rights abuses that are taking place.  The UN High Commissioner of Human Rights, Navi Pillay, said that “resort[ing] to lethal or excessive force against peaceful demonstrators not only violates fundamental rights, including the right to life, but serves to exacerbate tensions and tends to breed a culture of violence.”  The UN Security Council has also given its support to the NATO mission in Libya, and we will likely see further discussion in other UN bodies as the “Arab Spring” continues.

As the rest of the world scrambles to adjust to the rapidly changing political climate, the people of the Middle East and North Africa continue to stand up for their rights in a region that previously represented the only part of the world virtually devoid of democratic governments.  There is still a lot of hard work ahead for the reformers and nation builders of the “Arab Spring,” but they have taken a revolutionary first step on the road to democracy and freedom.

To keep up with the journey as it continues, follow the Guardian’s “Path of Protest”.