If you have been up to date with the news in Libya, you are probably aware that the situation in Libya is escalating. Libya has now become the center of attention for not only the media but also the U.N.

Libya’s bloody crackdown on protesters and its innocent civilians is alarming. It is reported that thousands may have been killed or injured. 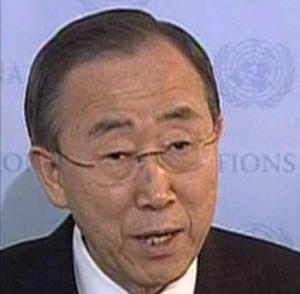 U.N. Secretary-General Ban Ki-Moon announced at a press conference on Wednesday, February 23rd that the current situation in Libya is unpredictable and it is possible that the situation could go in many directions, many of them, which are dangerous. He also stated that the international community should remain unity and act together. While the young people are pushing the frontier of freedom, it is important to note that there should be no violence and instead respect for human rights. He emphasized that the government of Libya should protect its people as attack on civilians are violations of international humanitarian and human rights law and those responsible must be held accountable.

Ironically, Libya is an elected member of the Human Rights Council and now some members have called for its expulsion.

On Friday, February 25th, the UN Human Rights Council met in a special session in Geneva, Switzerland to discuss possible sanctions against Moamer Kadhafi’s embattled government while the UN Security Council met Saturday 26th, in New York for a formal session to discuss the crisis in Libya and Moamer Kadhafi’s refusal to halt his crackdown on democracy protests.  See below for a brief overview of those sessions:

Along with Secretary of State Hillary Rodham Clinton, Russia’s Sergei Lavrov, as well as counterparts from Britain, France, Germany, the European Union and Italy, the Human Rights Council, the UN’s top rights assembly, decided unanimously on Friday to approve Libya’s exclusion from the body.

It also launched an UN-led investigation into “systematic violence” in Libya that could amount to “crimes against humanity,” after 1,000 people were reportedly killed in attempts to crush an uprising against Kadhafi.

The U.N. Security Council unanimously decided to impose economic and military sanctions on Libya and urged the International Criminal Court (ICC) in The Hague to pursue charges of war crimes against Kadhafi, members of his family, and 16 of his political and military advisers.

At the meeting, U.N Secretary General Ban Ki-Moon announced that the U.N. receives daily reports of clashes and the “indiscriminate use of violence” resulting in an estimated 1,000 deaths and countless arrests and wounded in Libya. In addition, reports of Kadhafi’s supporting forces killing wounded opposition members in hospitals where they were being treated for wounds, have also reached the U.N.

The results of the meetings were praised by human rights groups, but they also urged the international community to ensure protection of civilians in Libya and justice for victims of violence over the coming months.

How do you think the unrest in Libya should be handled? Is the international community doing enough?  How can peace be achieved?  Let us know what you think and keep posted with UNA-GB on the current situations in Libya.