This summer, UNA-GB had the exciting opportunity to partner with John Hancock’s MLK Summer Scholars Program. The goal of the project is to employ Boston youth in various non-profits throughout the city for the summer, allowing them to gain professional office experience. UNA-GB was lucky enough to be one of the selected non-profits, and we employed a rising junior from Boston Latin Academy, Bianca Diaz, to be our Summer Scholar.

Along with working in a professional office throughout the summer, the Scholars attended workshops every Friday at Boston University’s Agganis Arena. Each week, the workshop had a different theme, ranging from what to do with your summer earnings to physical fitness, from personal branding to social responsibility.  I was fortunate enough represent UNA-GB as a mentor for a small group of MLK Scholars during the Friday workshops. In our group discussion, the Scholars talked about how to improve the education system in the city of Boston, how to manage their student loans after they graduate from college, and how they feel about their neighborhoods.

At every workshop, the Scholars heard from a distinguished member of the Boston Community, who represented the theme of that week’s workshop. One of the speakers was Boston City Councilor Ayanna Pressley, who shared her journey from growing up in the urban environment of Chicago where her mother lived paycheck to paycheck to make sure she attended the best school in the city to entering the Boston political arena. The Scholars were extraordinarily impressed with her candor and her passion for the city of Boston, and her desire to see each one of the Scholars and all of Boston’s youth succeed. 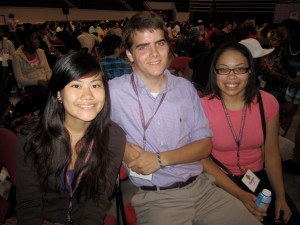 At the end of the 7 week session, the Scholars participated in a celebration of their achievements, and their gifts. Many of scholars put on performances of their own forms of personal expression, through rap, dance, song, and poetry. One particularly inspiring young woman, who interned at Write Boston, shared her story about growing up in Afghanistan and how, due to the violence and turmoil, her family had to flee to the Russian Federation, and eventually immigrated to Boston. She challenged the group of over 600 Scholars to join advocacy efforts to build a peaceful future for Afghanistan.

Overall, the MLK Summer Scholar experience enabled the Scholars to gain invaluable insights into the professional world, while serving the community.  I feel extremely fortunate that I was able to share in the Scholars journey, and UNA-GB and I feel privileged to have been a part of the program.  We look forward to working with more students in the future!

Check out a video about the program below and learn more on their website.