Child Marriage Call & Response: An Afternoon of Action for Africa

Yesterday afternoon, May 21, the Women’s Forum@UNA-GB welcomed many guests to celebrate Africa Day with a delicious lunch and inspiring conversation. 50 community members and leaders joined us to raise awareness about the issue of early child marriage in sub-Saharan Africa. At noon the room was buzzing with lively conversation as guests enjoyed Kenyan dishes from Taste of Kilimanjaro Catering and delicious fresh fruit juices from Teranga Senegalese Restaurant.

UNA-GB Senior Manager of Strategic Partnerships & Development, Kaitlin Hasseler, opened up the forum, framing how one goal of the Luncheon was to celebrate how far Africa has come – she shared hopeful statistics including that between 2000 and 2010 six of the ten fastest growing economies were African, the poverty rate has been on the decline by about 1% every year, educational opportunities have expanded and more girls are in school, and in 2010 Africa achieved a major global milestone when South Africa hosted the World Cup.  She then introduced Wamburu Mitaru, a Berklee student originally from Kenya, to start off the celebration with a powerful song dedicated to the children of Africa.

Despite the encouraging progress in Africa, there are also significant challenges the region faces, including the 2nd highest rate of child marriage globally, which the panelists were then tasked with expanding upon.  The focus was not only on engaging in a dialogue about child marriage but also shining a light on those whom have already begun making a difference in their communities to combat the practice.  Blessing Rogers of Hope for Children International, Inc., Josephine Kulea of the Sambura Girls Foundation, and Amanda Grant-Rose of Lift Up Africa, offered different perspectives on the issue of child marriage. Ms. Rogers provided more information about the historical and cultural context surrounding the topic, explaining where the practice originated from and what kept communities tied to the practice.  Josephine spoke more about her organization and shared her personal experiences, including detailing a particular marriage intervention that she led in her home community of Samburu, Kenya.   Amanda Grant-Rose followed by highlighting Lift Up Africa’s work supporting the organization HELGA and their bride rescue project – this work is led by Priscilla, a Maasai woman who has earned the trust of her community and spent the past 2 decades rescuing girls and educating them (when Kaitlin visited this program in November 2011, she had rescued 706 girls at that point!). 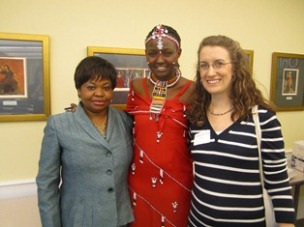 Our panelists- Blessing, Josephine, and Amanda

Wamburu Mitaru ended the luncheon with another beautiful song that was a call and response with the audience – a fitting end to an event focused on how we as a community can answer the call to action on ending child marriage!

Thank you to everyone who attended and helped to make it a wonderful afternoon!  See more photos here from the Luncheon and stay tuned for upcoming events with our Women’s Forum on our event calendar.

Posted in Our Programs, Women's Forum

Africa Day is observed throughout the world on May 25th. The aim of this day is to celebrate the diversity and successes of Africa, and to highlight the cultural and economic potential of the continent. Africa Day is the annual commemoration of the founding of the Organization of African Unity (OAU) in 1963. On July 9, 2002, the OAU was succeeded by the African Union (AU), whose aim is to promote economic, social, and political integration, and democracy on the continent. This year will mark the 49th anniversary of the founding of the OAU.

This year, United Nations Association of Greater Boston will honor Africa Day by spreading awareness about the prevalence of early child marriage in sub-Saharan Africa. Child marriage has been a common practice in many parts of the world since very early times. Even though child marriage affects both young boys and girls, girls under the age of eighteen constitute the population that is most adversely affected by it. According to the International Center for Research on Women (ICRW), girls who get married as children are frequently prone to diseases such as HIV and obstetric fistula. Once married, the girls’ lives become limited to performing childcare and other household chores. Due to their relative lack of social power, girls often are subjected to domestic violence. Furthermore, once child brides get pregnant, their dreams of going to school and having bright futures frequently end.

Sub-Saharan Africa has the second highest rate of early and forced marriage in the world. According to Plan UK, approximately 14.3 million girls in this region are married before they reach the age of 18. Child marriage is associated with significant health risks and consequences. According to the Center for Disease Control and Prevention, in sub-Saharan Africa, girls ages 15-19 years old are 2-8 times more likely than boys of the same age to become infected with HIV. Similarly, child marriage has played a critical role in the spread of cervical cancer among sub-Saharan Africans as HPV infection has become endemic in this region. Pregnancy suppresses the immune system, thus contributing to many girls in this part of the world becoming infected by diseases such as malaria. Malaria kills close to 1 million people each year around the world—90% of that in Africa alone.

It is crucial for all of us to educate ourselves about the issues surrounding early child marriage, its consequences and ways to combat it. As global citizens, it is our responsibility to oppose harmful practices, and to help our fellow human beings realize their human rights and live fuller lives. To broaden our knowledge of the issues and to discuss ways of combating this harmful practice, the Women’s Forum is bringing together some remarkable women leaders to share with us their insights about successful programs and projects. We will have:

Josephine Kulea, an acclaimed Kenyan children’s rights activist. Ms. Kulea has rescued many girls from early child marriage and female genital cutting, and has placed them in schools instead. She recently started the Samburu Girls Foundation, a project supporting women’s right to education, and fighting female genital mutilation and forced marriage.

Amanda Grant-Rose, a representative from Lift Up Africa, will share with us the organization’s extraordinary HELGA Project, and the Bride Rescue Project, which grew out of HELGA. These projects provide girls rescued from early childhood marriage with education as well as room and board. They work to help young women develop self-esteem and a sense of self-efficacy.

Blessing Rogers, President and Chief Executive Officer of Hope for Children International, Inc. Ms. Rogers both works directly with children through her organization Hope for Children International, Inc., and she addresses legal issues concerning child marriage. She is a human rights activist concentrating on the rights of children and women, and she is the host and executive producer of Afrik Express, a talk show focusing on Africans in the diaspora.

In addition to these brilliant women leaders, Wambura Mitaru, a Kenyan singer and Berklee College of Music scholarship award recipient, will join us as part of our celebration! Ms. Mitaru will share with us her musical heritage and artistry.

Our catering partners will be Taste of Kilimanjaro & Teranga Restaurant!

We invite you all to join us on Monday, May 21st! Celebrate Africa and support us in fighting child marriage!

You can RSVP here: http://africadayboston2012.eventbrite.com/