This year’s UNA-USA Annual Meeting just wrapped up last week, and was a great success with more than 150 UNA-USA members from 63 Chapters and 31 states coming together in Washington DC from June 10-12 for Chapter development sessions, briefings at the U.S. Department of State, and Advocacy Day on Capitol Hill.  We had an impressive showing by Boston members this year; along with staff member Kaitlin Hasseler and Board Member Alma Morrison, we had 5 members actively participate in the conference.  Read their recaps of the activities below.

A palpable energy was evident in the Westin DC City Center Hotel on Sunday as members convened for the first time since the UNA-USA-UNF merger was finalized last year.  The meeting opened with Executive Director Patrick Madden and our very own Alma Morrison, outgoing Chair, Council of Chapters and Regions presiding over the annual business meeting and awards ceremony. Alma was recognized for her extraordinary, selfless allegiance to UNA-USA throughout a challenging time. She is a legend and a hero to all UNA-USA members and we are immensely proud of her at UNA-GB.

The morning continued with a regional breakout session and working lunch. UNA-GB members, along with Alma and UNA-GB staff member Kaitlin Hasseler met with leaders from the two Connecticut chapters to share programming successes, ideas on membership and retention, and the possibility of hosting a joint event in the coming year. The great Gillian Sorensen (who we were thrilled to have as a keynote speaker at our UN Day Luncheon last Fall) discussed with us some of the myths and misperceptions of the UN and why she commits her life to serving as an “advocate, debater, and defender” of the United Nations. Aaron Sherinian, Vice President of Communications and Public Relations at the UN Foundation presented on utilizing online media strategies for chapters while Laura Giroux, Membership Director at UNA-USA and Andrew Cornelius of the UNA-USA Denver chapter gave a presentation on how to retain members and attract young professionals.

The UN Foundationʼs newest campaign, Shot@Life, champions the cause of vaccines
in the fight to save childrenʼs lives in the developing world.  Director Devi Thomas spoke of how to effectively advocate for global vaccines. Chapters seeking advice on how to integrate Model UN programs were able to meet with Global Classrooms staff and chapter leaders in the afternoon.

On Sunday evening, the UNA-National Capital Area Young Professionals hosted a happy hour attended by over 40 UNA-USA members of all ages to share appetizers, cocktails, and conversation on UN news and chapter activities.  Following the happy hour, a film screening of Iron Ladies of Liberia was showcased at the hotel.

On Monday, members were treated to a spectacular, unique opportunity to enter the State Department for a day of high-level

meetings and a memorable luncheon in a hallowed, historic venue, the Benjamin Franklin Dining Room. The morning began with a panel discussing Agenda 21 and how to battle the misperceptions rampant now. We were then regaled by one of Americaʼs legendary diplomats, Ambassador Thomas Pickering, on peace and security and the state of the UN Security Council. Concurrent sessions followed on human rights and reproductive health.

The elevators filled as we rode to the luncheon in the famed Benjamin Franklin Dining Room, taking time to savor the many paintings and artifacts displayed there and to walk out on the veranda overlooking Washington with the enormous Stars and Stripes and State Department flags waving proudly in the June air. United Nations Foundation President and former U.S. Senator Tim Wirth and Reid Detchon, Vice President, Energy and Climate, UN Foundation spent the luncheon informing us of the key energy and climate issues surrounding the Rio+20 Conference and the historical progress made since 1992. The day at State concluded with a terrific overview of U.S.-UN relations by Dr. Esther Brimmer, Assistant Secretary of State for International Organizations, U.S. Department of State. Dr. Brimmer need be thanked for so kindly setting up our luncheon. 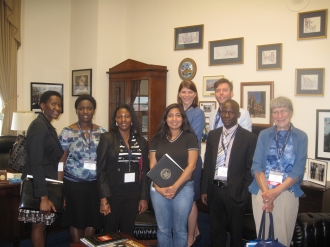 The meeting culminated Tuesday with an early breakfast at the Lutheran Church of the Reformation before our march on the Capitol to wear out our soles promoting legislation to ratify the UN Convention on the Law of the Sea, compel Congress to ensure the U.S.
seeks a second term on the UN Human Rights Council, and that congressmen support the Senate Appropriations bill which includes full funding of the U.S. monetary obligation to the UN. Meetings with house and senate staff took place throughout the day with a lunchtime break in the Kennedy Caucus room to hear from John Danvers, Foreign Relations Committee Staff Director to Chairman John Kerry, U.S. Senator (D-MA). UNA-GB representatives articulated the agenda with poise and precision, meeting with the offices of Congressmen Tierney, Lynch, Capuano, Markey, and Keating as well as the offices of Senators Brown and Kerry. Staff welcomed us with open arms, open ears, and open support for our advocacy acumen. The day was a great success for UNA-USA as members passionately sought support from their congressional delegations to maintain a robust U.S.-UN partnership keeping with the recent data from two prominent, national nonpartisan polling companies showing that 86% of Americans support a strong U.S.- UN relationship. 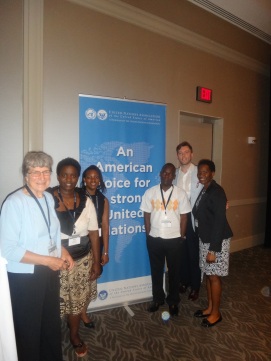 The 2012 UNA-USA Annual Meeting concluded Tuesday afternoon as members made
their way to trains, planes, buses, and automobiles for their journey back home. After
four days of inspiration, perspiration, and cerebration the state of the UNA-USA is the
most vibrant it has ever been. Bringing UNA-USA and the United Nations Foundation together has fostered a new, vigorous pursuit to advocate for and defend the work of the UN and its role in the international arena. On behalf of myself and UNA-GB, thank you to all who made this meeting a tremendous success. Let us continue the vital work of informing citizens, educating students, and serving as dedicated citizen ambassadors of
the United Nations. The work goes on.

Below is additional feedback and the opinions of our other volunteers that attended the conference!

Immaculate Nansubuga:
“I joined the UNA-USA early this year and I am greatly honored to be a part of the largest network of UN supporters in US history.  I was so fortunate to attend the 2012 Annual Meeting in Washington, DC, where I enjoyed not only the talks and discussions on some of the recent world’s most pressing challenges, but also I was greatly inspired by the various speakers, staff and chapter members of the UNA-USA whose impeccable dedication, passion and support for UN was explicit in numerous ways.  Our meetings with Members of Congress were smooth, thanks to Kaitlin, Alma and Daniel who delivered the keynotes and asks with just the right mix of hard data, examples and opinions.

I learned a lot about how the UNA-USA connects people, ideas and resources to help the UN solve some of the major global problems.

I also learned the reasons why it is more important than ever for the US as a nation as well as each individual who wants to see a better world, to show our continued support for the UN, goals and objectives.” 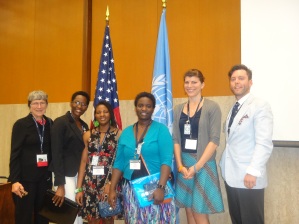 Ritah Nakandi:
“My objective of attending the conference was to broaden my knowledge of UN’s activities and familiarize myself with its progress in the global affairs. From the speeches and discussions, I was able to identify UN’s input especially with the MDG’s and its advocacy for Congress’s continued support of UN’s activities in the future. It was such a great experience for me to enlighten UN’s contribution in the world especially by demonstrating it’s progress in the Millennium Development Goals. I was mesmerized by UN member’s enthusiasm in implementing UN’s goals like the SHOT@life which captivated me.  Most importantly, the people have high energy and their loyalty to the UN mission is an everlasting selfless act that is a worthy call that I will always be drawn to.  I learned the significance of member engagement and how it consolidates one to have successful outcomes. This empowerment makes us, the UN members feel as one and as a family striving for a common goal and always be hopeful. It was such an informative and fruitful experience for me and I was really blown by the ambiance of the places that I never thought I would even get a chance to visit.”

Virginia Kinene:
“It was a great pleasure meeting you at the conference. As a new member of the UNA-GB, i found the conference very informative. I gained first hand information about the organization’s mission, objectives and how the organization is of great value to society through it’s development  goals such as, ensuring child education is promoted and its significant achievement so far, as reflected in the statistics.

I too enjoyed the great presentations and discussions conveyed by the the various UNA and State representatives on interesting topics such as awareness on human rights and the mechanisms for establishing standards in human rights, communication mechanisms, and the various advocacy methods, among other topics.

It was also an amazing experience meeting great personalities of both the U.N and the State and to also have made professional relationships with people from diverse regions and culture.” 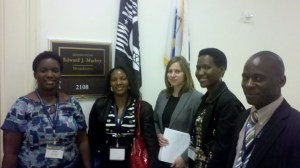 Martin Ssekyewa:
“It was an honor to have such a great opportunity to meet with UNA-USA members from almost all states, people who have devoted their time, experience, and money to sacrifice for the good of humanity. I believe that this meeting was about the common good for all humanity. I had a chance of exploring the millennium goals which do not only favor Boston, but the whole planet and even back to the community where I came from in Uganda.

I have learned to work together with others in order to address the global issues and to find ways how to help my community here in Boston and back home in Africa. From the conference I learned new skills of being a model citizen; I am now well aware of the means I can use to bring back harmonious co-existence and harmony between the environment and man, because without the existence of one, the other is affected. I was so excited to learn how UNA has incorporated the millennium goals for all groups of people despite of their origin, race, gender and color, to work together as a one family.

According to my knowledge, the UNA programs have contributed a lot toward the National Development Plan, with a focus on equity and inclusion, peace, recovery, population and sustainable growth, to mention but a few. I encourage all people to join and support the UN Missions.”

Thank you to Dan, Immaculate, Ritah, Virginia, and Martin, who attended the event on behalf of the UNA-GB! We greatly appreciated your comments, feedback and participation in the event! And we hope we can see exponential growth at next year’s UNA-USA meeting as well!