Ambassadors for a Week: Not Your Average Summer Camp

This past week, UNA-GB broke new ground by hosting our first ever Model UN Summer Institute!  We had nearly 40 youth forgo traditional camp activities like archery, swimming and horse-back riding to participate in a brand new week long camp, working towards becoming the next generation of global advocates, while also experiencing life on a prestigious graduate school campus.

From July 11-15, 39 rising 8th-12th graders immersed themselves in the world of Model UN and worked towards solving the world’s most pressing global challenges at Harvard Business School.  From 9am to 4pm each day of the five-day institute, students were introduced to international relations and critical 21st century skills like negotiation, public speaking and problem-solving through the lens of Model United Nations curriculum, with a culminating simulation of the UN General Assembly Disarmament and International Security Committee focused on international peacekeeping operations. Some of these lessons and activities the students participated included:

By the end of the week, students were well versed in the workings of the United Nations and formal debate, confident in their public speaking, and had made strong bonds with other students sharing their passion for international relations and world issues. 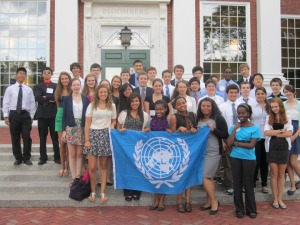 room in business casual attire, eager to attack the day’s proceedings (though bittersweet as well, since it signaled the pending end of camp).  Heavy debate, draft resolutions, and a motion to close debate and end the simulation mixed in with a few laughs and photos characterized the finalization of the MUN Summer Camp and a week the students, and the UNA-GB staff and interns, will not forget.

Don’t just take our word for it!  Check out photos, videos, live tweets and learn more about the week!  And stay tuned for some additional videos coming out featuring more highlights and interviews with the students, as well as a guest blog post from one of the campers.

A special thank you goes to National Grid, one of our fabulous corporate sponsors who offered 10 scholarships for students to attend this year’s camp!

We also hope we can offer additional sessions of camp next year, so more of our future leaders have a chance to step into the shoes of ambassadors!