This past Friday morning, March 4th, a group of more than 250 enthusiastic high school and middle school students from the Greater Boston area gathered at the Northeastern University campus for UNA-GB’s annual Invitational Model United Nations (IMUN) conference to take on the world’s most pressing problems.

The opening ceremony began with the keynote speaker Sasha deBeausset, BUILD Coordinator at the Tufts University Chapter, who gave an attention-grabbing speech about her global project in Guatemala, inspiring students to take action as global leaders for significant change around the world.

Student delegates, then, separated into six United Nations committees, including the UN Security Council and Human Rights Council and took on the role of diplomats from 40 nations including China, India, and Afghanistan, to represent their countries. The students engaged in vigorous debates, alliance building, strategic negotiations, and resolution writing. They debated solutions to pressing global conflicts from the crisis in Haiti to the ongoing issues such as Human Organ Trafficking, HIV/AIDS Pandemic and Migrant Workers. 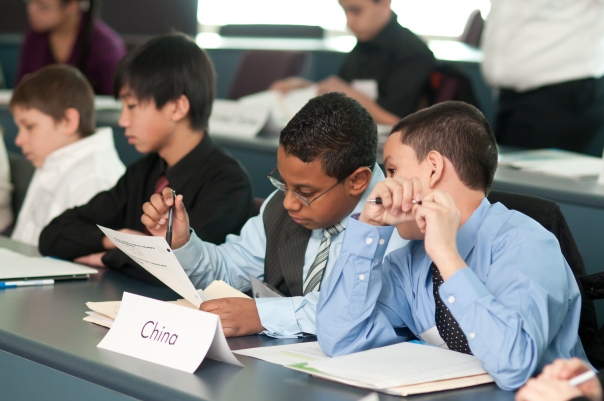 The productive day ended with the closing ceremony where each committee chair presented awards for the Best Speaker, Best Position Paper and Best Delegation. The IMUN participants did an amazing job of communicating their thoughts from each country’s perspectives and coming up with worldwide resolutions to the problems.

Overall, it was a successful day and a great experience for everyone. Thank you to all of those that came out to make this event successful! Without all the staffs and schools that participated, the 2011 IMUN would not have happened. Stay tuned for more event photos and a video of the day’s events!