← Celebrate the first World Interfaith Harmony Week!!
Egypt Today: What is to come next? → 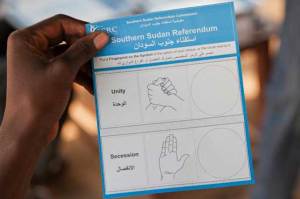 On Monday the Southern Sudan Referendum Commission announced the preliminary results of the self determination referendum of Southern Sudan.  The results showed that 98.83 percent of all voters chose independence.  The overwhelming voter turnout is an official and monumental reflection of the will of the people of Southern Sudan.  View the UN Secretary General’s statement here.

Throughout the voting period, the referendum was widely expected to pass. The passage of the referendum makes South Sudan its own country, with the hope of ending its long history of violence.  The creation of an independent Southern Sudan also means rearranging commercial and political alliances throughout the region.

The next step is defining the borders between the North and South which is highly disputed due to its rich oil fields, mineral deposits, fertile land, and access to water.  Beyond the access to oil and other resources, the country is also divided by religion and language barriers. Click here for a detailed map of the disputed areas within the Sudan.

← Celebrate the first World Interfaith Harmony Week!!
Egypt Today: What is to come next? →