While it may not have maintained dominant coverage on the 24-hour news networks, the United Nations’ relief efforts in Haiti remain in full force.

Just over six months after the 7.0 earthquake that rocked the Caribbean nation in January 2010, destroying the country’s infrastructure and killing an estimated 230,000 people, the United Nations Children’s Fund (UNICEF) announced July 27 that the UN is hoping to reach an additional 500,000 children in the ravaged nation in a second round of emergency immunization.

Among the illnesses being vaccinated against are diphtheria, tetanus, whooping cough, measles, rubella, and polio. Haiti is considered by UNICEF as one of the nations where children are at the highest risk for contracting of these dangerous diseases.

In addition to providing health care, UNICEF and its partner organizations are providing water to 1.2 million people and food to an estimated 550,000 children and women.

The United Nations Office for Project Services (UNOPS) also recently announced on July 22 that they have assessed more than double their initial target of 100,000 buildings in Haiti for structural damage. With the help of the World Bank and the Global Facility for Disaster Reduction and Recovery, the United Nations have been working closely with the Haitian government in the recovery and rebuilding process.

The destruction caused by the disaster continues to dominate Haiti's landscape.

These announcements come on the heels of international football superstar and UNICEF Goodwill Ambassador Lionel Messi’s visit to Haiti, during which the reigning FIFA World Player of the Year visited a homeless camp and attended UNICEF meetings. In addition, the Barcelona player met with troops from his native Argentina serving the UN Stabilization Mission in Haiti (MINUSTAH).

Additionally, the United Nations Educational, Scientific, and Cultural Organization (UNESCO), recently launched “A Book for a Child in Haiti,” collecting French-language books in an effort to jumpstart the educational system for “internally displaced persons (IDPs)” in Haiti.  The program is also working to forge relationships between Haitian and French schoolchildren.

However, in spite of all the efforts, there is still much work to be done. Over 800,000 Haitians are living in tents with no access to clean water or sanitary conditions. Almost 500,000 buildings have been deemed unlivable and still need to be removed, and education and health facilities have yet to sufficiently recover from the disaster. UNICEF reports that over 1,200,000 children are being exposed to exploitation and abuse amidst the disorder and turmoil.

The UN’s World Food Program (WFP) is spearheading the expansive relief effort, providing food, agricultural support, and both short- and long-term solutions to the island nation. This work is even more critical with hurricane season fast approaching and threatening the already fragile Haitian infrastructure.

Show your support and Help Haiti Rebuild by donating to the WFP’s Haitian relief efforts and stay informed by visiting their Haiti Emergency website. 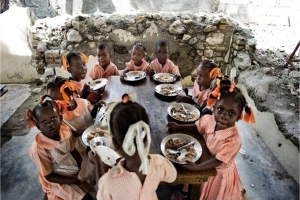 There is work left to be done in the rebuilding process in Haiti.